skip to main | skip to sidebar

Be a New Orleanian. wherever you are.

But sometimes, no matter where or how long some stickers stick, they last.

Recently, when I saw a “Be a New Orleanian. wherever you are.” sticker on a leaning post in a struggling New Orleans neighborhood, I knew it had staying power--even if the post doesn’t.

Blake Haney, 33, created the sticker while he and several-hundred thousand other New Orleanians found themselves displaced in different cities and towns after Hurricane Katrina.

“'Be a New Orleanian. wherever you are.' is a shout to all of us that were scattered across the country," Haney says. "Even if you're stuck in Houston or Jersey, remember to be who you are."

It’s now the adopted ode of displaced locals around the world, frequent visitors and never-beens who can’t shake Katrina images from their minds or internet searches.

Three years post-Katrina, Haney and his business partner Patrick Brower, 30, have turned the "we're in this together" rallying cry into a profitable tee-shirt company called Dirty Coast.

Their flagship shirt was an adaptation of the “Be a New Orleanian. wherever you are." sticker. They have since released over 50 often inspirational, sometimes satirical and always pro-New Orleans tee-shirts. Dirty Coast's best-seller these days has a head shot of Barack Obama, with “Geauxbama” underneath in homage to Louisiana’s French roots.

Their shirts have ended up in national media on the backs of Angelina Jolie, Jimmy Fallon, Brad Pitt, Sienna Miller and others. The company has grown considerably from the weeks after Katrina. They opened a store in a hip section of New Orleans and hope to open a second store in the next two years, while continuing to grow internet business at dirtycoast.com.

There are at least 30 more shirts in the developed idea phase according to Brower.

Dirty Coast's trademark X and fleur de lis sometimes trips fans up because of the thousands of spray painted Xs on the facades of New Orleans homes.

"The X marks the spot and New Orleans represented by the fleur de lis is the treasure," Brower says.

Haney created the X marks the NOLA design while in a coffee shop in Lafayette, La. about three weeks after Katrina.

"If you know New Orleans, there is something about it that attracts a certain personality. It's a mindset, a way of being, and I think it's the thing locals and NOLA converts connect with."

"I started dropping off stickers at local businesses when I got back," Haney says. He knew he was on to something when he would return and storekeepers asked for more.

"They couldn't keep them in the stores."

They've ended up on turn tables in LA, bar shelves in Manhattan, bumpers in Maine and water bottles in South A 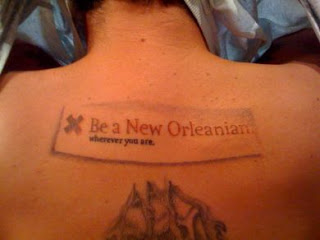 One New Orleanian, Brower says, tattooed an image of the sticker. He has a picture at his desk to prove it. It's even signed by the tattoo artist.

About 10 minutes after Brower shows me the picture and after several more stories of random "Be a New Orleanian..." sticker sightings, I ask him where the craziest place he's heard a sticker is.

To see some places where the sticker has been sighted: